Is Your W-4 Optimized for You? 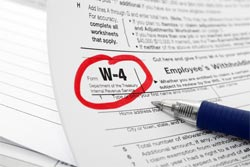 The W-4 is the IRS form you complete when starting a new job to let your employer know how much federal tax to withhold from your paycheck.  Even though you’ve given your employer a W-4 in the past, with the many changes to the tax code, you should consider revisiting this form. There are specific times when you should consider refiling it to optimize take-home pay, while still fulfilling your tax obligations. Today’s post will look at how you can optimize your W-4 for you and your family—and when you should do it.

As we mentioned, Form W-4 lets your employer know how much money to withhold from each paycheck for federal tax purposes. Accurately completing your W-4 is

END_OF_DOCUMENT_TOKEN_TO_BE_REPLACED

TCJA: What it Said vs. What it Did

The Tax Cuts and Jobs Act of 2017 (TCJA) is the most significant tax code overhaul since the Tax Reform Act of 1986.  The TCJA had four goals; tax relief for middle-income families, simplification for individuals, economic growth and repatriation of oversea income.   It cut individual income tax rates, doubled the standard deduction, eliminated personal exemptions and capped state and local itemized deductions.  While on the surface tax compliance now sounds simpler, as you will see, this isn’t the case.

First and foremost, the new 1040 tax form is now postcard sized.  However, smaller is not always simpler; the new tax forms have become more

END_OF_DOCUMENT_TOKEN_TO_BE_REPLACED

"Spring Forward" with a W-4 Check-up

Remember that government form called a W-4? It's usually part of a pile of other forms when starting a new job, and determines the amount of income taxes that your employer will withhold from your paycheck. This week, the IRS issued a draft of the new Form W-4, which reflects changes under the Tax Cuts and Jobs Act (TCJA).  Here's what you need to know...

A Form W-4 comes with a series of worksheets that help you calculate the appropriate number of allowances to claim. You can take a closer look at the full current W-4 form and worksheets here. The revised Form W-4 doesn't take effect until 2020.

How often should you reevaluate your W-4?

There really is no right or

END_OF_DOCUMENT_TOKEN_TO_BE_REPLACED

With CEO compensation packages trending higher for decades, excessive remuneration paid to CEOs of publicly traded companies is not a new topic. However, the debate escalates with the passing of the Tax Cuts and Jobs Act of 2017.  Included in the sweeping tax law changes is an attempt to close a loophole which has contributed to the debate.   For the best understanding of the loophole, let’s start with its history.

If you were around in 1993, you’re more likely to remember the Waco tragedy, the World Trade Center bombing, or Joe Carter’s walk-off home run (still not over it) than the implementation of IRC Section 162(m). The provision resulted from